It’s not every day we undertake two projects at one job site, but this was the case recently in the Villages at Brushy Creek. The homeowners had two different concerns, and luckily, covered patio and pergola builder Archadeck of Austin was the right contractor for both! 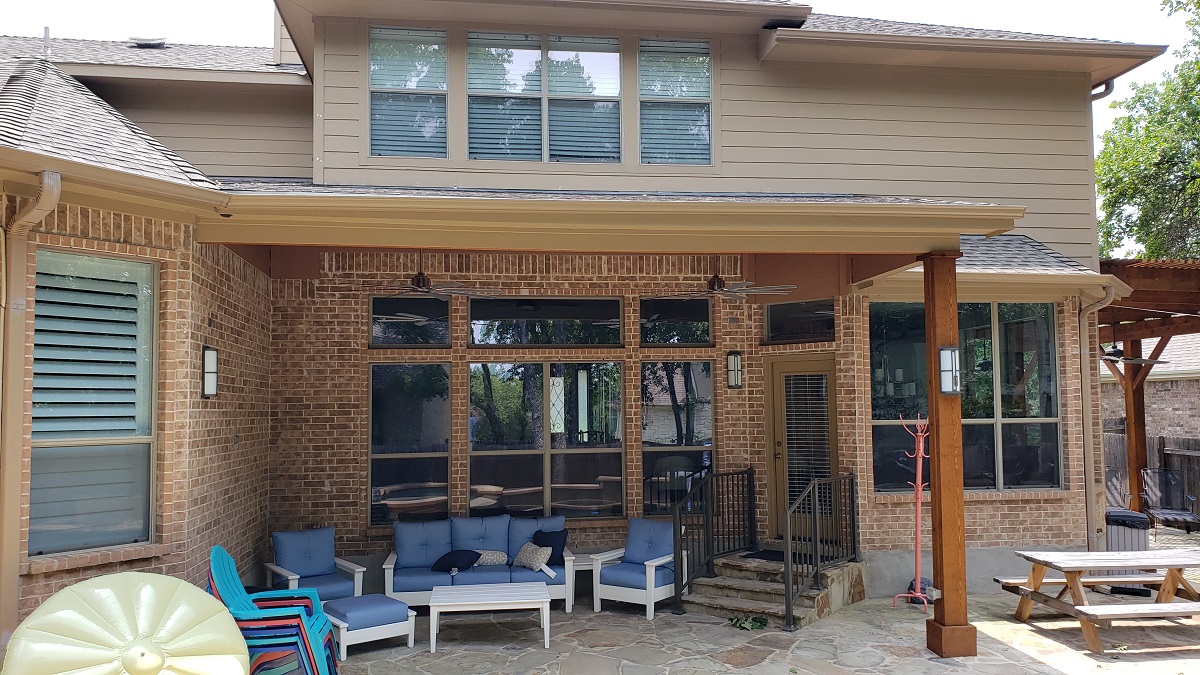 When It’s Not Safe to Sit Under Your Pergola …

The clients’ most immediate concern was one of safety. A large pergola covering the outdoor dining area was in danger of collapsing. The previous homeowners had built the pergola themselves, and, unfortunately, that meant it was not professionally engineered. They built four supporting posts using non-pressure-treated LVLs (laminated veneer lumber), which they nailed together and wrapped in cedar. The pergola’s span was too big, the LVLs were not strong enough, and the pergola sagged in the middle. It was a mess. 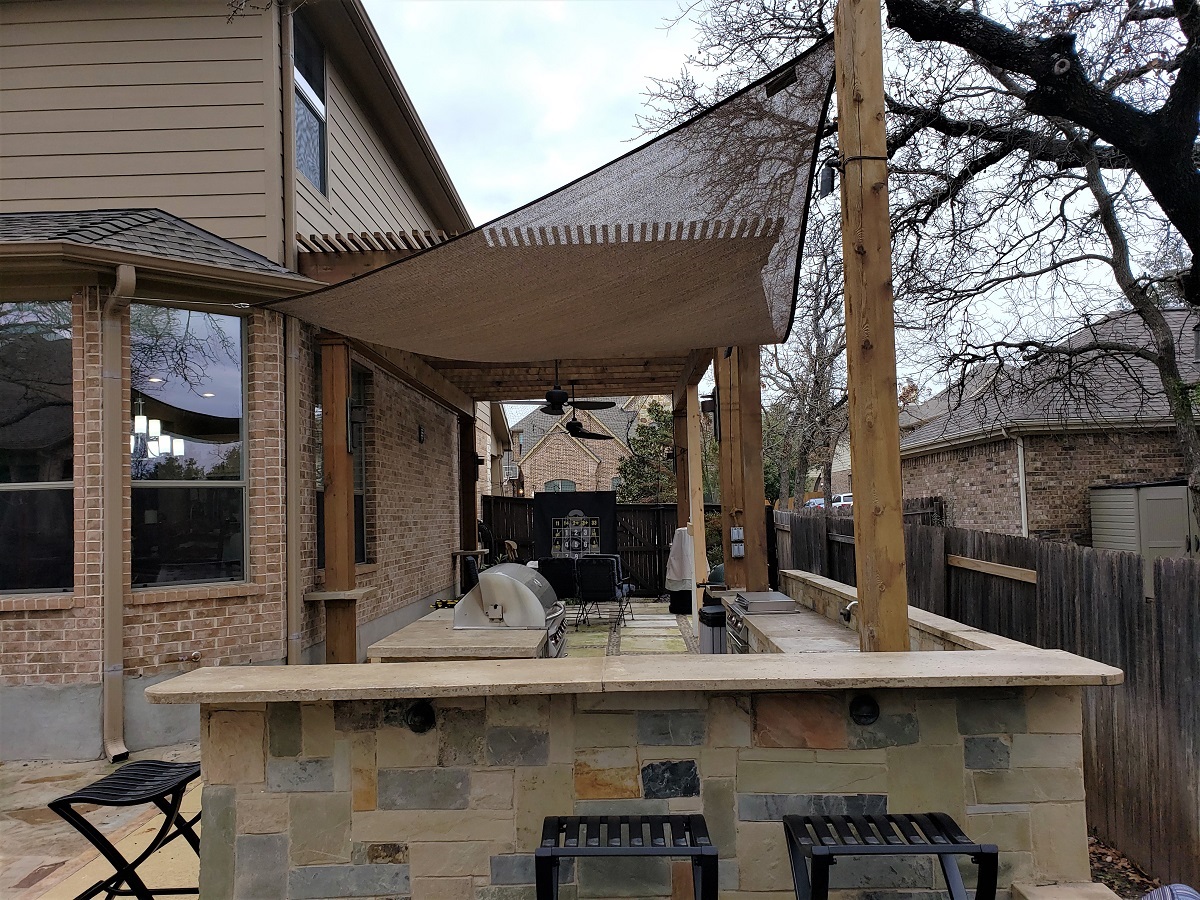 The current homeowners installed temporary supports to keep the pergola from sagging further. Then they called a professional pergola designer, Archadeck of Austin.

Your Pergola Engineers to the Rescue 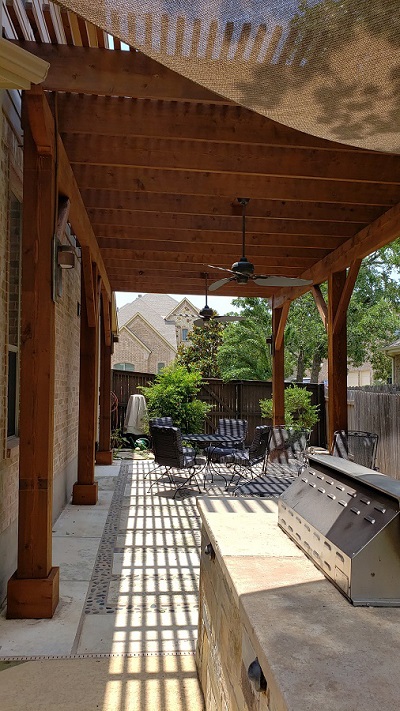 We didn’t need to replace the pergola itself, we just needed to provide the proper support for a structure of its size. Once we installed a temporary bracing system to hold the pergola up, we removed the support beams and added new posts. Now it’s supported by six posts instead of just four.

Then we installed solid 4 × 12 beams, making sure the pergola was engineered properly this time. We split the beams up so they ran 12’ in both directions, and they sit atop metal posts. We also added the proper bracing to the pergola since it was free-standing. During this process we removed and reinstalled the existing lighting and ceiling fans. For the finishing touches, we stained the pergola and posts. 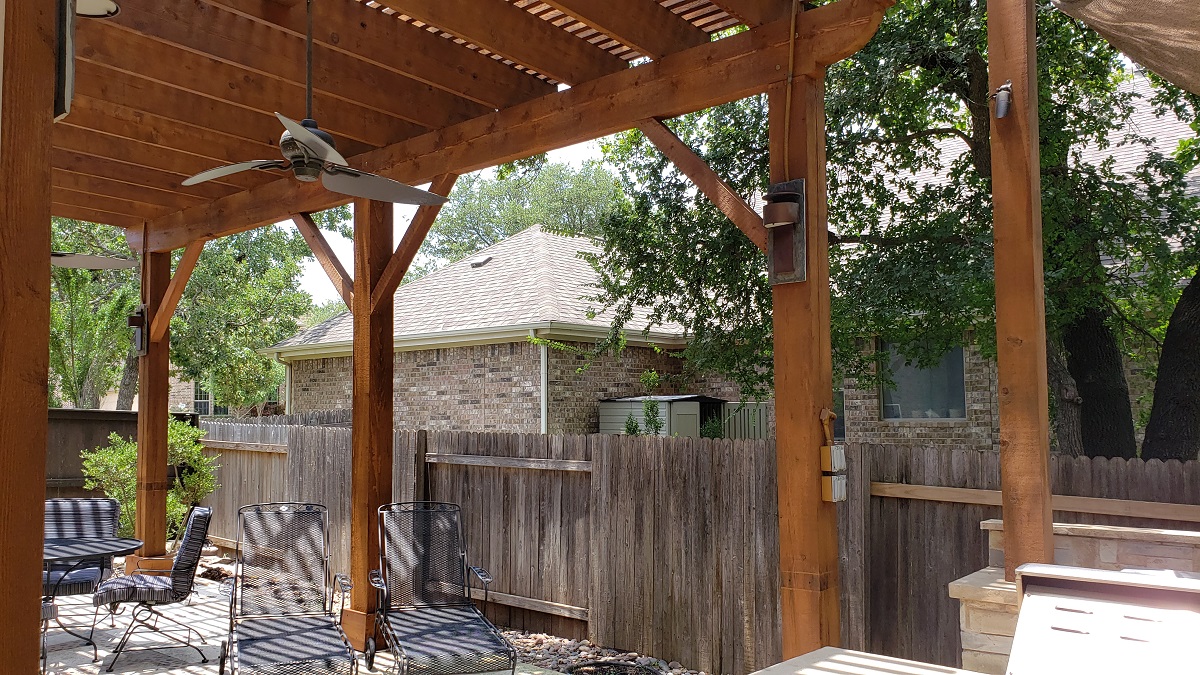 Now the homeowners have a delightful – and safe – area for dining, right beside their outdoor kitchen, with ample shade provided by their very sturdy pergola.

When It’s Too Hot to Enjoy Your Patio …

The second issue requiring our attention was also related to shade. The home has a pool in the back yard, and a patio filled the space between the house and the pool. Unfortunately, the family didn’t have a speck of shade on that patio. They seriously needed shade if they were going to enjoy summer out by the pool. 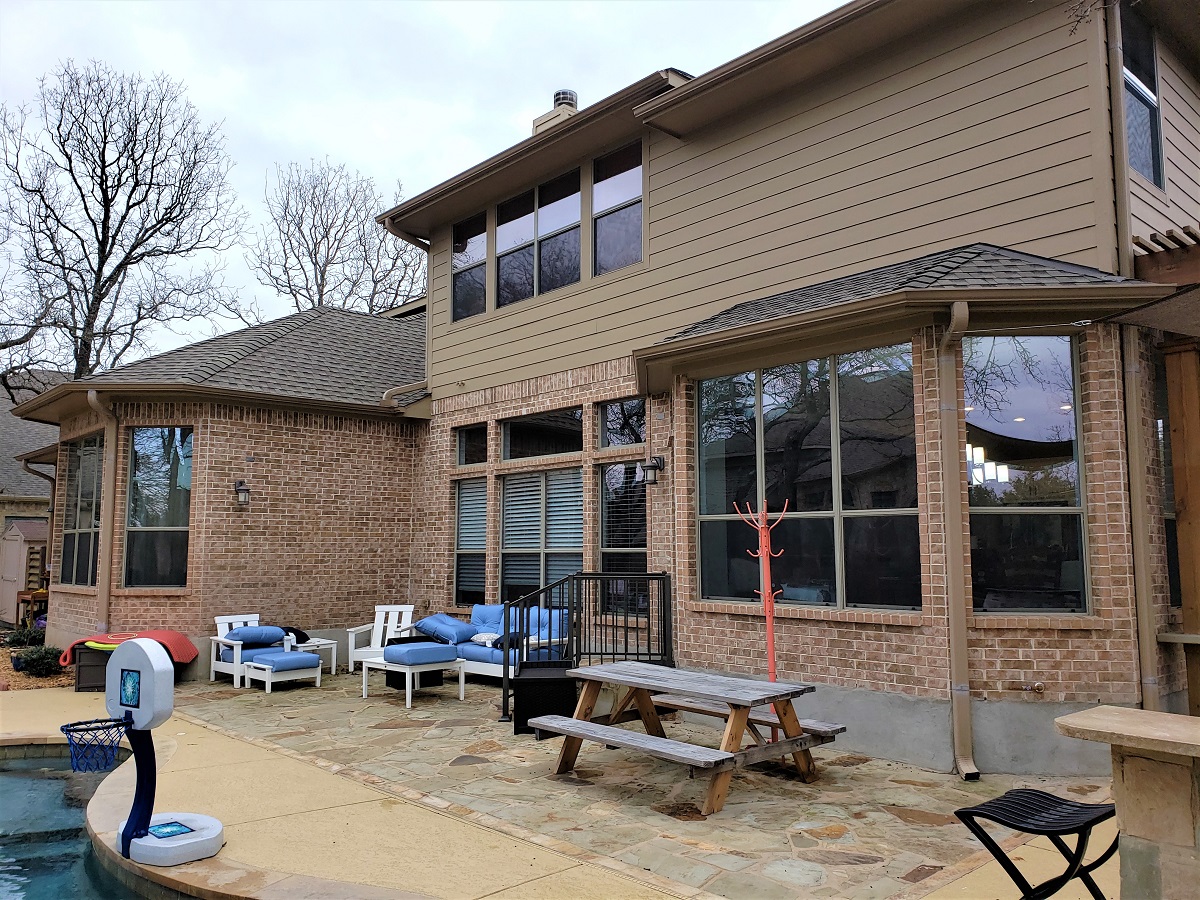 A patio cover was in order here! Archadeck of Austin has not only designed and built more patios than we can count, we have also added patio covers: to plenty of uncovered patios.

No Half Measures … Shade from a Shed Roof

The cover we designed for this patio is in the form of a shed roof added to the back of the home. Because this new roof addition has a low pitch, we had to include an ice and water membrane, following the rules of the Asphalt Roofing Manufacturers Association. Any roof with a shingle system and a pitch less than 4/12 requires this special membrane in order to maintain the warranty on the asphalt shingles. 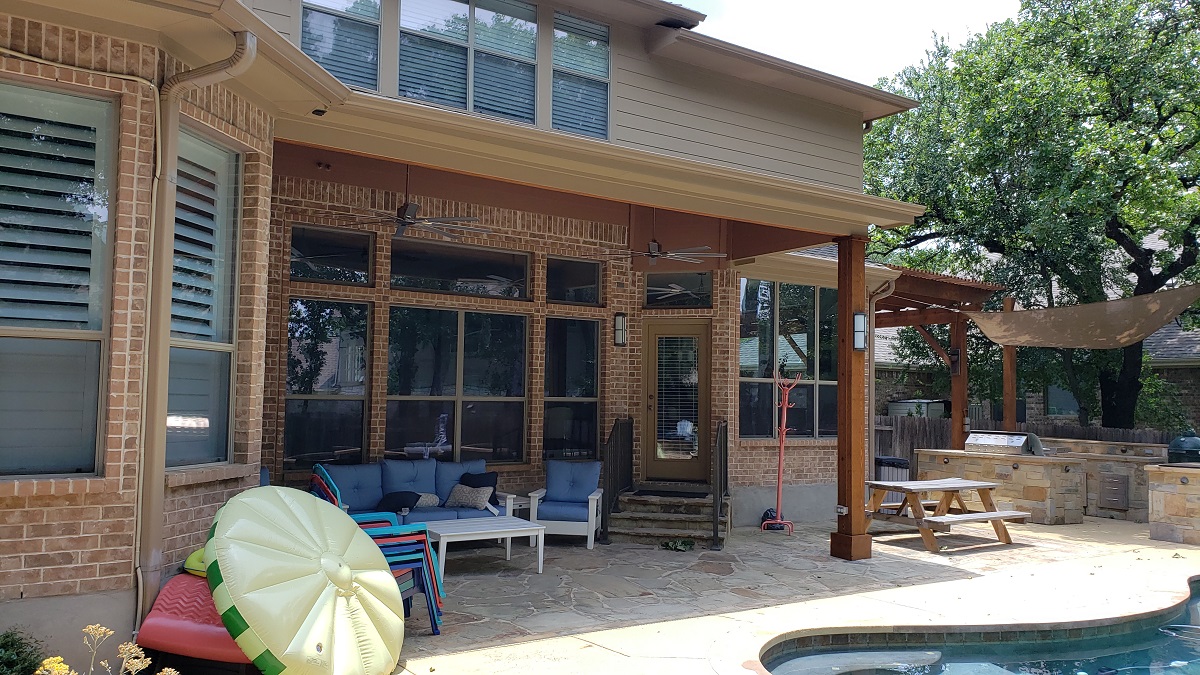 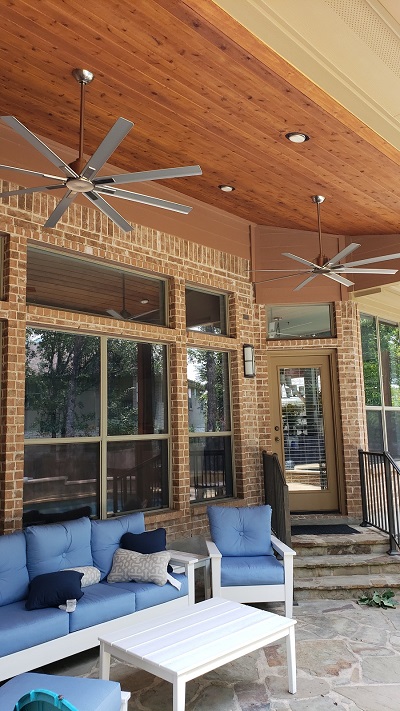 We built a gable wall at either end where the new roof ties into the house. Using Hardie siding along with Hardie soffit and fascia, we matched the new trim to the home’s exterior. The outside of the large beam is wrapped in Hardie, too. We covered the bottom of the beam and the inside portion with cedar to blend with the cedar ceiling.

Yes, a ceiling! The interior of the new patio cover has a beautiful tongue-and-groove ceiling of natural cedar. We installed recessed can lighting and ceiling fans, too.

These two projects, the restored pergola at the side of the house and the new patio cover on the back, shared one aspect in common. Where we installed new support posts, we tore out concrete and installed a footer system that met engineering standards. We installed new flagstone in those areas. Looking at these posts now, you would never know they created that much disruption.

Does your hot Texas patio need shade? Would a patio cover or custom pergola addition solve the problem for you? We can design and build a new patio with shade for you, or we can custom-design the perfect shade structures for your outdoor living spaces. Call Archadeck of Austin today at 512-259-8282 or email us to schedule your free design consultation.