When you have a beautiful patio in Georgetown, TX, and you want to add a pergola, only a stunning Archadeck of Austin pergola will do it justice. If you know in advance you’re eventually going to add a pergola, you can have the patio designed to accommodate a future pergola. That’s right, a future pergola! This important step will save you time and money, later, when you’re ready to complete your patio by adding the pergola as a brilliant finishing touch. 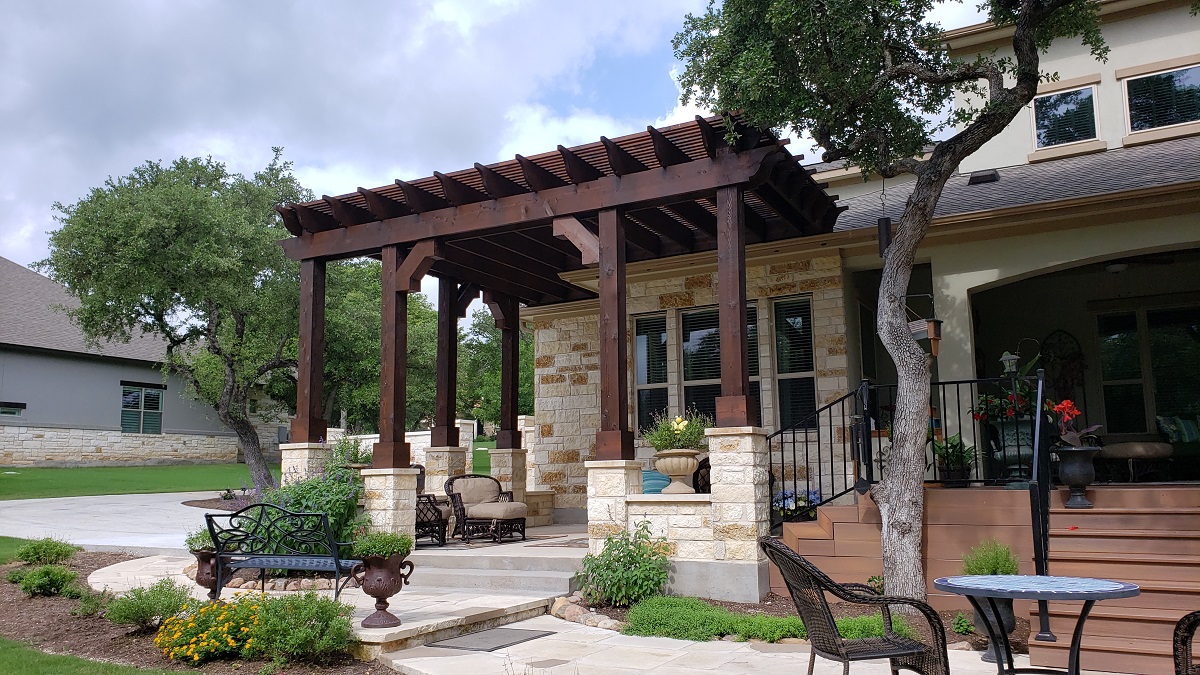 How Do You Bring Much-needed Shade to an Uncovered Texas Patio?

With a big Texas pergola, of course!

Archadeck of Austin is known around these parts for our amazing pergolas. We’ve been designing and building pergolas across the Austin area from Georgetown and Round Rock to Circle C Ranch and beyond for almost 20 years. While a pergola can add style and beauty to your outdoor living space, most of our clients want a pergola for the shade it can provide. 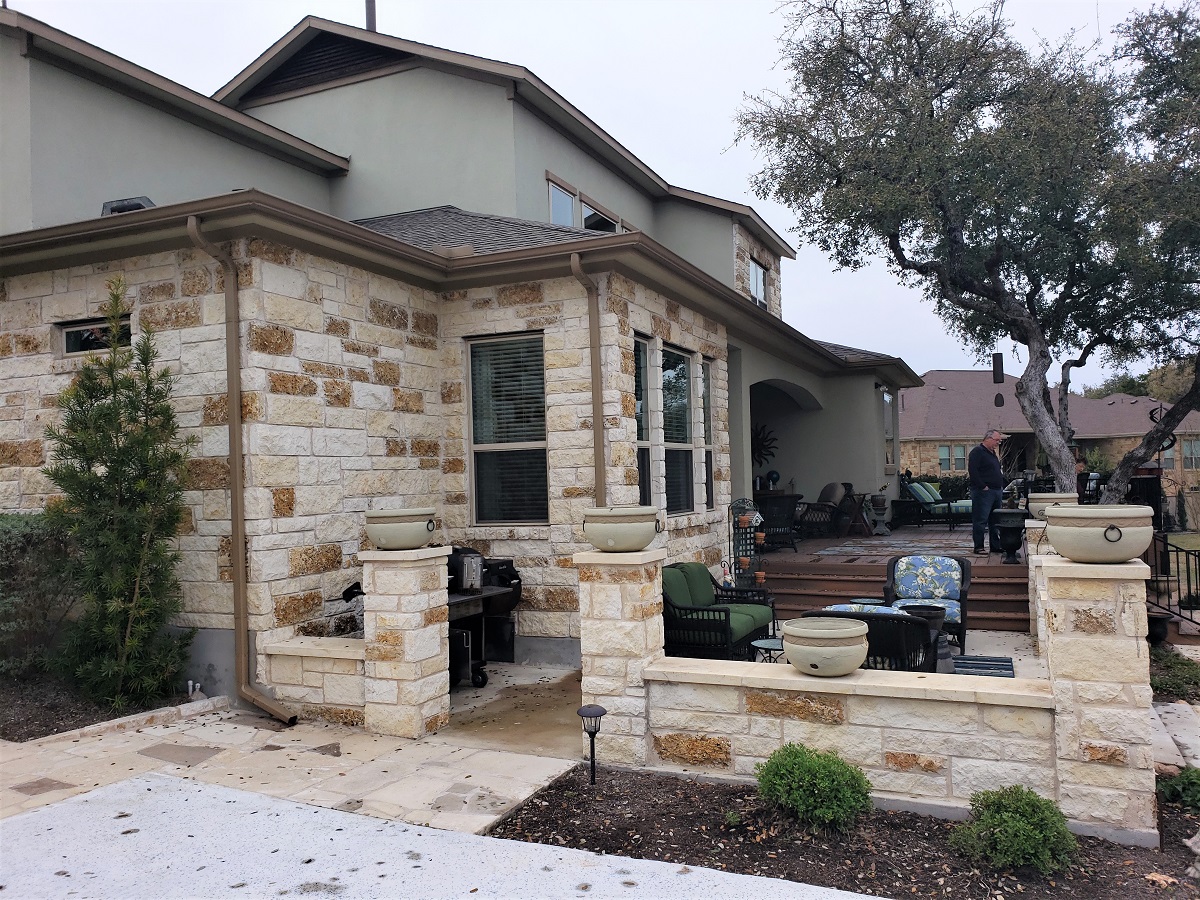 When you look at the “Before” photo of this patio and adjoining deck, you may notice this home didn’t have very much covered or shaded outdoor space. There is a small covered porch off the deck, but the deck and patio were exposed. Most of the outdoor living area was open to the heat and burning UV rays of the bright sun. This family needed some shade!

It’s true that a pergola won’t provide complete shade without an additional covering. We described a completely covered pergola recently in our post, Round Rock Texas Pergola Backyard Oasis. We do have ways to increase the amount of shade a pergola provides, however, without adding a cover. For this new Georgetown, TX, pergola project, we placed the slats at the top of the pergola very close together for additional shade.

How Do You Anticipate Tomorrow’s Pergola Today? 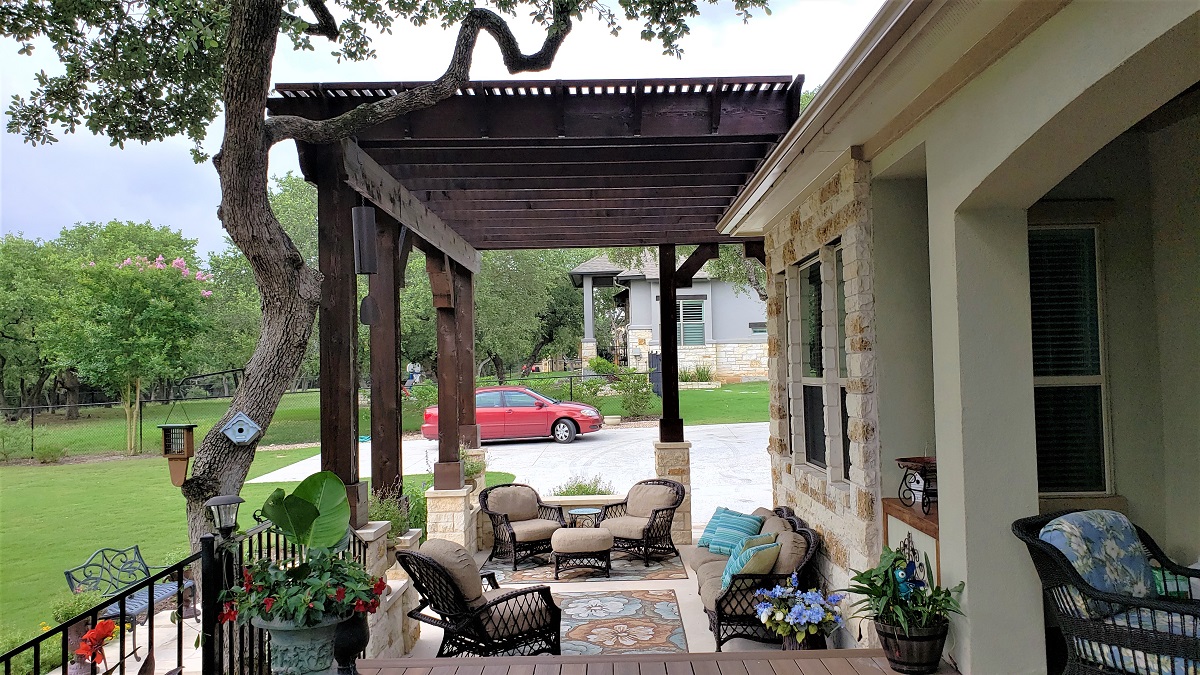 There’s a secret hidden within the design of this patio. If you know what to look for, you can see it lurking mysteriously in the “Before” photo. Archadeck of Austin did not build this patio, so we can’t take credit for that. At first glance, this walled patio looks complete. The low patio wall could serve as a seating wall if the homeowners need additional seating. The wall is punctuated with six stone pillars that flank openings from the patio to the yard. It’s topped off, or capped, with smooth Lueders limestone – as is each of the stone columns. 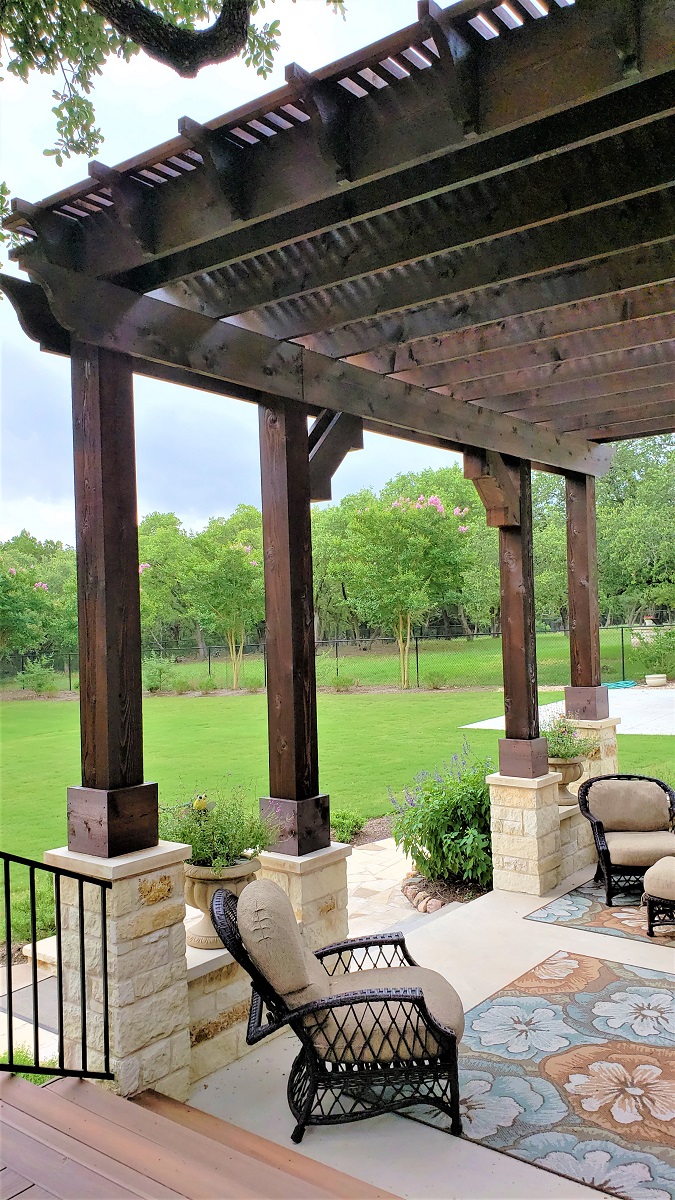 Yes, so, it’s a beautiful hardscape project. What’s so mysterious about it? The secret is the forethought and preparation that went into this patio design. The homeowners knew they wanted to add a pergola … eventually. For whatever reason, they wanted the patio built first and the pergola added at a later date, to be determined. Some homeowners defer a portion of an outdoor living project because of budget constraints; for others it comes down to timing or indecision. 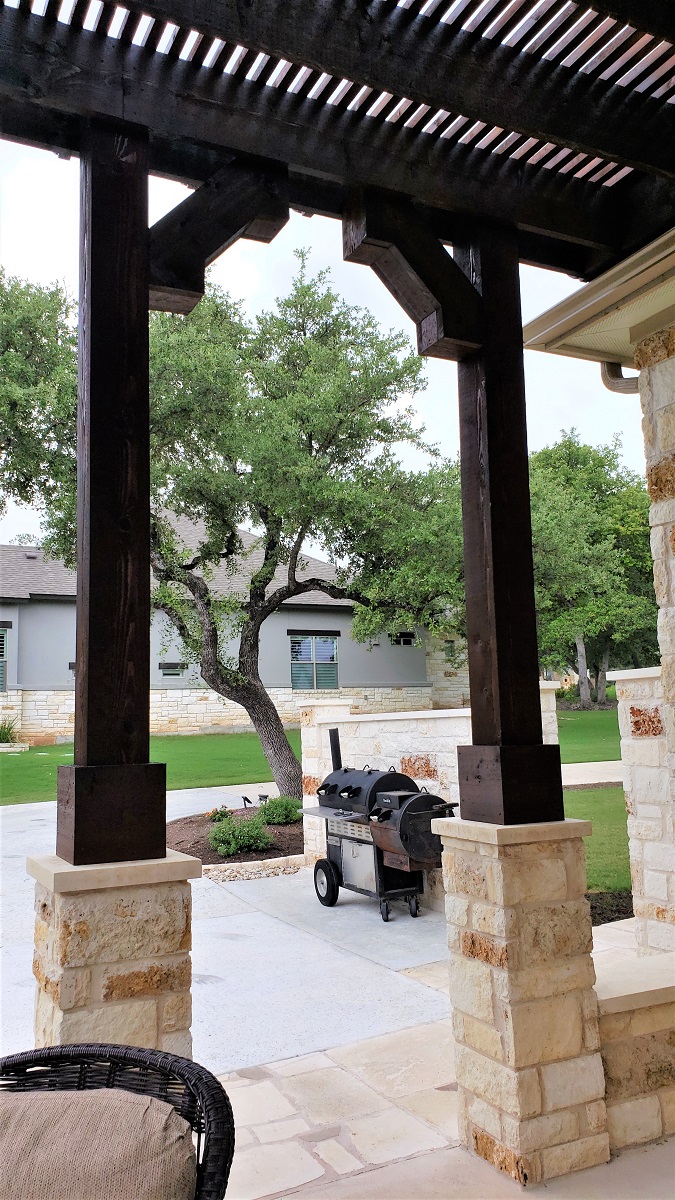 The stone pillars in the patio wall were designed to become columns supporting the weight of a pergola. These columns were filled with concrete before Archadeck of Austin arrived to add the pergola. With this level of support already in place, we were able to mount the pergola’s posts right on top of the Lueders stone caps on the existing columns. 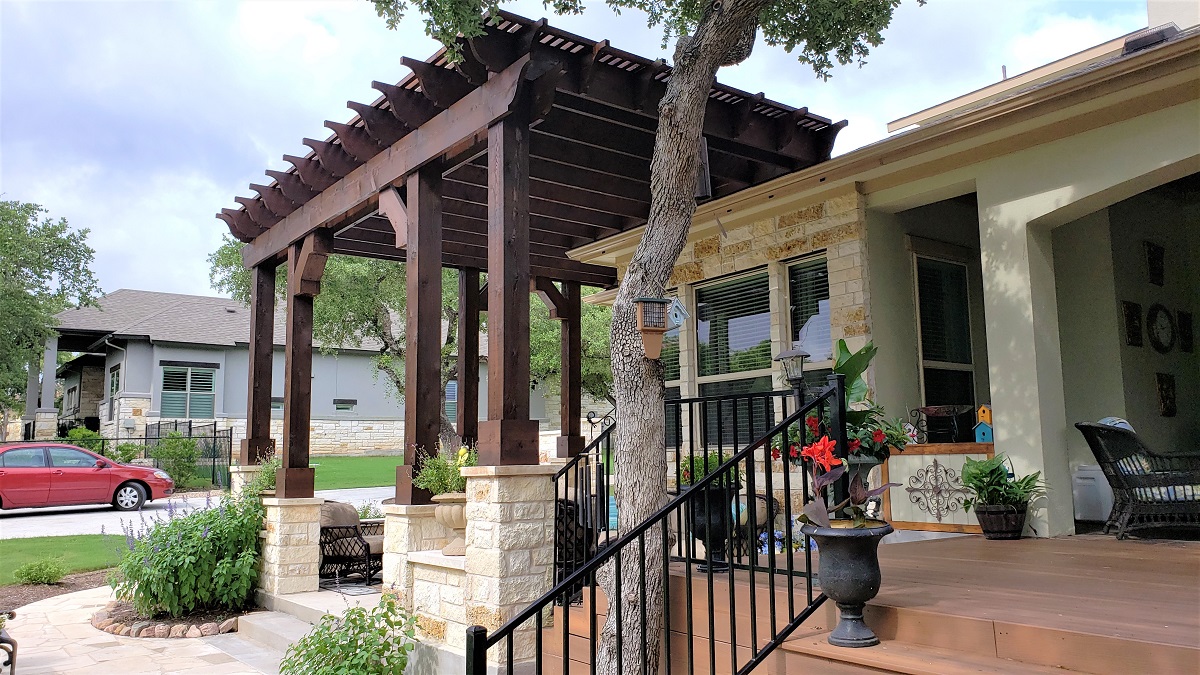 Rarely do homeowners have the foresight to plan ahead, structurally, for a future addition to their outdoor living space. When they do, it saves them money in the long run. We have incorporated this level of preparation into projects we’ve designed when homeowners requested part of their project be built now and part completed later. What’s unusual here was that someone else laid the groundwork for this Archadeck of Austin “future” pergola. The homeowners’ cost for our pergola was lower because of the prep work already in place.

How Do You Make a Beautiful Georgetown TX Patio Even More Gorgeous?

With a stunning Texas pergola, of course! 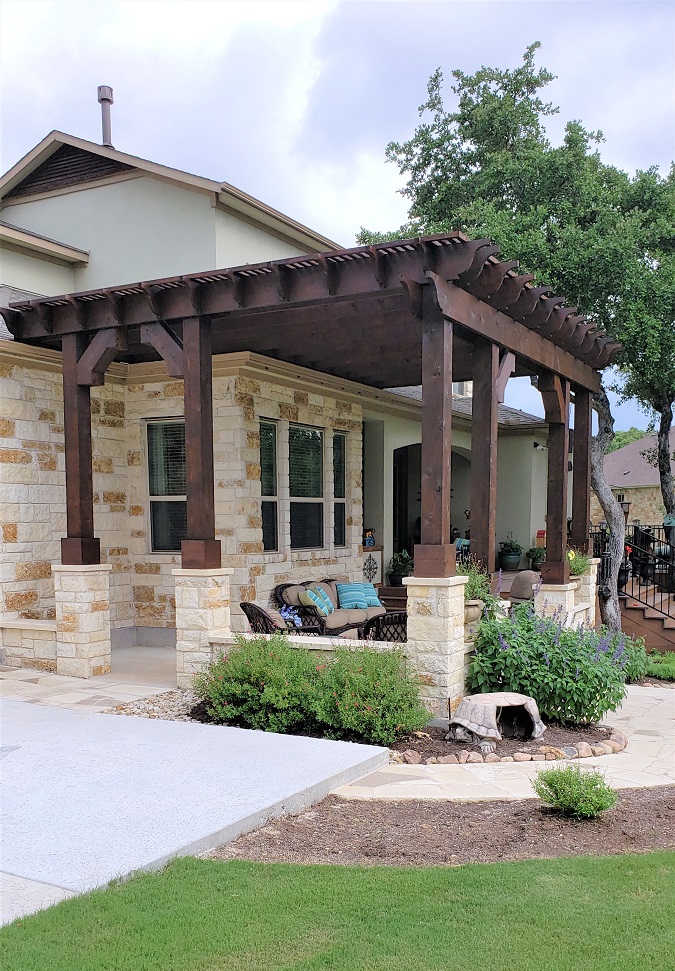 — As an added plus to an already beautiful structure, this project recently received runner-up in Archadeck’s 2nd quarter design excellence contest!

We built this custom-designed pergola with cedar and stained it using a special stain the homeowner had purchased. While many of our pergolas are free standing, this is an attached pergola mounted onto the home’s fascia. The gutters run under the edge of the pergola, allowing water to drain right off the roof. 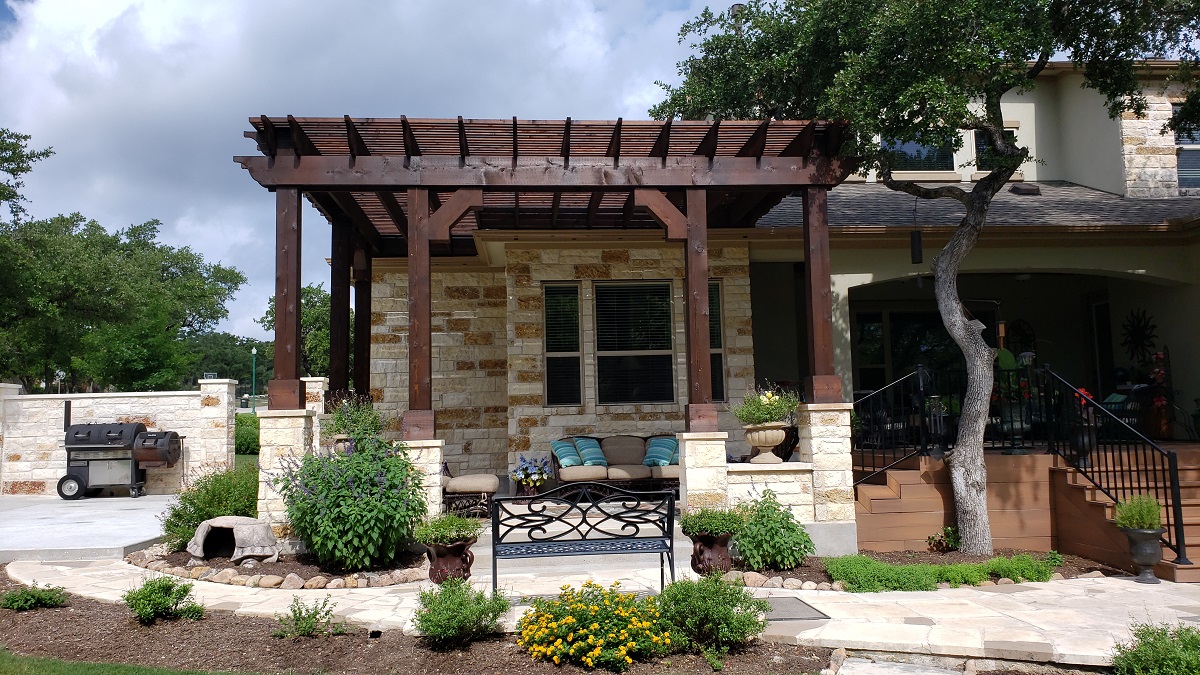 The cedar bracketry you see on the pergola posts was designed purely for aesthetics, actually serving no structural significance. Visually the brackets direct the eye to openings in the patio wall where the homeowners or guests will step from the patio into the yard. Decorative tail cuts on the sides of the pergola add a finishing touch to this unique pergola design. Many pergolas feature an ornamental design at the end of the rafters, but it’s unusual to see this design element repeated at the sides.

Would your patio look even better with a custom pergola addition? Do you regret building a patio without sufficient shade cover? Are you interested in learning more about a phased building program where we design your complete project to build a portion now and a portion later? Call Archadeck of Austin today at 512-259-8282 or email us to schedule your free design consultation.